skip to main | skip to sidebar

This is part one of a four part series about teaching volumes in calculus.

I showed my students a prototype paperweight made of Play-Doh. I told them that I was hoping to mass produce them and sell them to other math teachers. But first, I would have to know how much clay I would need to make one and since the nearest art supply store is over 30 miles away, I needed to know exactly how much clay I needed. 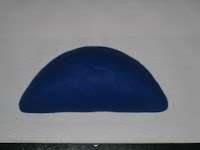 I asked them what shape they thought the base was. At first, they said a half circle and after asking them to think what it would look like if I put two of these together, someone quickly said, "It's the first half of the sine function." Amazingly brilliant, my students.

Then I told them that I made this to be a very mathematical paperweight- if it was cut down the middle at any point, there would be a semi-circle: 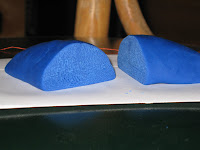 I then threw all the book vocabulary at them: "Let R be the base of a solid that has semi-circles as cross-sections perpendicular to the x-axis..." We remembered how the integral of a length gave us area and conjectured that the integral of area would give volume. Now it was time to figure out what area we would want to integrate and after some discussion, we determined that adding up the area of all of the semi-circles would be the easiest, so we finally came up with this integral for our volume:

We then had a great discussion of how to evaluate this by hand and eventually came up with our answer. I thanked them very much and said I had another shape for them to calculate the volume of (this time, using only my big mathematical jargon): Let R be the region bounded between y equals x squared and y equals x cubed in the first quadrant. Let R be the base of a solid that has squares as cross-sections perpendicular to the x-axis. Find the volume of the solid.

As they all scratched their heads, I went behind my desk and pulled out a big box of Play-Doh and gave each student a tub of their own. I told them to make the solid first, and then we could go about finding the volume. I brought around dental floss and chopped up their shapes to see if they were accurate. Then we created the integral, focusing on the area of the cross section. They went home with Play-Doh and more problems to practice making solids and integrals for.
Posted by Ms. Ashton

Email ThisBlogThis!Share to TwitterShare to FacebookShare to Pinterest
Labels: Volume